skip to main | skip to sidebar

Report of our EXpedition 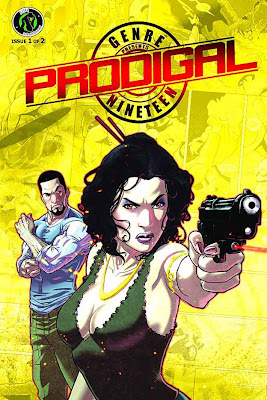 About two weeks ago, April 14th to be exact, I came across something that made me forget at the time why I originally walked into the comic store. The comic shop was Earth 2 and I originally entered the premises to peruse the many artist sketch books they keep on hand. However before I could turn the corner around the rack of manga and down the aisle there he was Todd Harris aka Brocasso sitting behind a table with a small stack of a comics called "Prodigal" , a laptop, and a Wacom tablet. There was another gentlemen there as well talking to Mr. Harris about the pros of using a Wacom. There discussion gave me time to look up close at the small stack of comics that I had been eyeing since I walked into the store. YES!!! The artwork was that good that I forgot why I came into the store. Someone may call it an ADD moment but I'm not ADD in fact my ability to stay focused is impeccable which is why I focused in on this comic.

There will be no spoilers here so when you go to pickup the book you'll have full satisfaction but here's the gist of it....

"Prodigal Egg of First Light" follows the exploits of a female genius Malaysian ex-criminal named Jacinto and a brawler named Lennox who could whoop Batman and Captain America's butt as a warm up on the way to the main fight (that would be both The Bats and Cap at the same time). If you've lost something or someone there is nobody in the world better at getting it back than J & L. They have one simple motto you want it, we get it, no question. A group of monks hire the duo to return the Egg of First Light and of course it's not that simple. Let just say by the end of book one you'll see why Lennox hates ninjas and you'll begin to see why he hates magic. The action is good and steady with witty dialogue to match. This is book one of two. It's a refreshing piece of work from an artist whose work is inspiring.

Todd will be at Earth 2 this Saturday signing books one and two for Free Comic Day. Todd Harris's website is http://www.brocasso.com/ go CHECK him OUT!!!
Posted by The Artists also known as The Artists at 10:35:00 PM

Down the Worm Hole